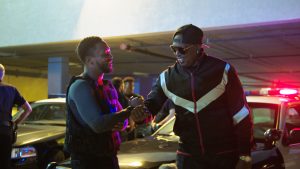 Master P. is making big plans for the second installment of his hood comedy classic, “I Got The Hook-Up.”

The New Orleans mogul has partnered with former BET Founder Bob Johnson’s company, RLJE Films, and UMC to bring the movie to theaters nationwide this July.

The second installment of “I Got The Hook-Up” features Master P and AJ Johnson reprising their roles as “Black” and “Blue,” two local hustlers who are now running their own restaurant.

They run into some cash troubles running the business and return to their old ways selling stolen cellphones, thanks to another stash of phones, which Black sells on the streets.

Fatboy SSE stars as Blue’s son in the movie, while DC Young Fly stars as his best friend Spyda, who found some molly in the stash of phones and decides to hustle the drugs instead.

“This project is not only hilariously funny, but it expresses the vitality of gentrification, entrepreneurship, and coming together as a family during hard times,” said Master P. “With all the tragedies in the world, we could all use a good laugh. This is one of the many projects on the way from Genius Minds Films.”

“I Got The Hook-Up 2” is slated to be released in theaters around the country on July 12, 2019, while the film will make its streaming debut on UMC (www.UMC.tv) in October 2019.

The movie is executive produced by Master P and his son, Romeo Miller.